Today, we had a full room in the European Parliament to discuss the true price of meat! With MEPs, NGOs and business representatives, we spoke about the need for a sustainability charge on meat and animal products. We called on the EU to take the lead. International media was very interested and articles were published in eg. Le Monde, the Guardian,  Fortune, Polish and Spanish newspapers.

FranceTV3 had an item about the event in Brussels 6th of Feb, see: https://www.francetvinfo.fr/economie/emploi/metiers/agriculture/consommation-faut-il-instaurer-une-taxe-sur-la-viande_3815469.html The Polish National TV broadcasted an item 5th of Feb habout the event in Brussels, in the main tv news program in Poland – „Wiadomosci”: https://wiadomosci.tvp.pl/46531638/podatek-od-miesa-w-calej-ue.

Download the powerpoint presentations that were held at the event here.

Shortly after the event, the two organizers Olga Kikou (Compassion in World Farming EU) and Jeroom Remmers (Tapp Coalition Director) went to the European Commission DG Sante (Health and Food Safety) and handed over our reports to some one who brought our reports to Alexandra Nikolakopoulou  (Head of Unit) and the Commissioner Stella Kyria Kides (they coordinate writing the EU Farm to Fork strategy now, to be published end of March 2020).

Read the newsarticles and the 2 reports presented at the European Parliament here.

Moderator of the event, MEP Bas Eickhout, vice Chair of the Greens said: "Meat induces significant external costs which are not reflected in its price to the consumer and require rapid correction". Our co-host MEP Sylwia Spurek (Polish, Social Democrats) opened the event, calling for change, as "the production of animal-based food is a threat to the climate, a cause of serious human diseases, a cause of suffering and killing animals." Spurek said: "When the meat tax should be introduced? As soon as possible bearing in mind we need to save the planet and we need to protect human health. Of course - a good law must assume that the meat industry will get time to prepare for changes. But this is matter of a few, not a dozen or so years". She continued: "Now political will is a key. I hope that our Greens and S&D groups will not hesitate to support this matter. Because if the new European Commission would like to fight the climate catastrophe, it cannot ignore the problem of the negative impact of animal farming on the climate. I hope that Frans Timmermans will show similar determination in the field of climate protection as he has in the fight in the rule of law area".

Spurek: "This initiative is not only an excellent mechanism to reduce the demand for meat. As a result, healthcare costs will also be reduced. Tax revenues are also funds to conduct green transformation. We need funds to develop new technologies and to support farmers and the food industry in switching to plant production".

CE Delft researcher Robert Vergeer presented their proposal for a policy package to incentivise the farming sector to reduce its environmental footprint and encourage consumers to adopt a more sustainable diet.

TAPP Coalition Director Jeroom Remmers advised the MEPs in the room to align the EU's food policy (Farm to Fork Strategy) with its environmental and climate ambitions (EU Green Deal) by ensuring that food prices include costs for greenhouse gas emissions. Remmers explained that member states have the authority to implement such taxes on meat including environmental costs. Based on the TAPP proposals, the Dutch Cabinet will soon present a proposal for fair meat prices in the country’s parliament this year. Remmers thinks the plans in the Netherlands will inspire other EU countries to do the same and should give the EU a reason to harmonise meat prices. He said that if the Commission does nothing, the single market risks price differences across member states, creating unfair competition between different livestock producing regions. Remmers believes the EU should therefore support a “sustainability charge” by proposing minimum prices on meat and 'carbon border adjustment taxes' on cheap imported meat products to the EU. In the meantime, he calls on the EU to redirect current EU farming subsidies away from unsustainable livestock production.

Dutch MEP Bas Eickhout, leader of the European Greens in the Parliament, told IHS Market that "discussions on unsustainable meat are quickly shut down by the European Commission and the Council". He said reports from organisations like TAPP help the Parliament advance discussions. The Commission is focusing on using their proposed CAP reform to reward more environmentally friendly livestock production. The upcoming Farm-to-Fork strategy is also looking to drive demand for sustainable meat by changing consumer behaviour. It may also lead to new food labelling that reects the social and environmental cost of products.

Daniel Azevedo, a representative from Copa-Cogeca, the EU’s farming association, challenged the idea of a meat tax since the EU environmental standards are already some of the highest in the world. He also questioned what would happen to the biodiversity that depends on livestock production and the farmers in these pasture lands. Remmers said a “sustainability charge” is not looking to punish farmers, it is about getting them a fair price since it would pay them on top of CAP subsidies, which is important since they are not getting the support from elsewhere. The sustainability charge could pay livestock farmers to increase biodiversity, sustainability standards and income levels. “Consumers want to have the low prices and supermarkets stimulate the race to the bottom,” he said. “The government has to step up.”

Environmental and consumer NGOs, as well as organic farmers' representatives, received symbolic checks, representing what citizens and farmers could gain from taxes on meat products: 32 billion euro per year of 28 European countries would have 'fair meat prices' and increase meat prices with ca. 25-40% to include environmental costs.. Revenues could be redistributed to reduce the price of fruits and vegetables, and given to low-income consumers and developing countries. European farmers can receive 10-15 billion euro per year (equal of 25% of all EU subsidies to farmers in 2019).

A symbolic cheque with this amount was handed over to a farmer representative (Isabella Lang, Policy coordinator IFOAM EU). Sini Eräjää, Greenpeace EU, received the symbolic cheque of 4 billion euro/year for developing countries (CO2-policy and forest protection). Camille Perrin, BEUC, received a cheque of 7-12 billion euro/year for reduced VAT rates and subsidies on fruits and vegetables in Europe and another cheque of 6 billion euro for low income households, so all could still afford to eat meat, even when prices go up 40%.

Olga Kikou, Head of EU Office at Compassion in World Farming agreed that the negative externalities from animal agriculture to the environment and our health have to be priced, so consumer pay the real costs. She said: "We believe that the first step is to remove subsidies to factory farming and place taxes on unhealthy and inhumanely produced food".

Mohammed Chahim (Social Democrats), in his closing words said: “I live in the Netherlands in North-Brabant, with most animals per square km in Europe, causing many environmental and health problems. External costs of meat consumption are paid through our taxes. We need to shift from a system in which we all contribute, to a system in which the people who pollute [by eating meat] pay. And everybody will be happy with a fair price on meat".

More photos and videos from the event can be found on CIWF Twitter thread: https://twitter.com/CIWF_EU/status/1225004225421303818?fbclid=IwAR3H5HkyEPolRaLMzs9iQ2sXNZbCiNSmIjRACf2v5pNTjhxKwhz_5tEmrz8

Sylvia Spurek (Social Democrats) opening words of the event: “The production of animal based food is a threat to the climate and the cause of serious human diseases and the cause of suffering and killing animals. Its time to stop it. Everybody in the sector, in the economy has to change: habits and business. We are entering a new chapter in the debate of climate change and animal welfare. What is on our plate is no longer a private matter. Everything with a positive impact on the environment, human health and animal welfare should be promoted and supported. Climate urgency is a fact. Each sector that generates environmental costs should contribute: including animal agriculture”.

A selection of the international media coverage:

According to a report of RISE  foundation in 2018, on average in the EU and in 19 EU Member States, meat consumption is double the amounts advised in dietary guidelines for health: http://www.risefoundation.eu/images/files/2018/2018_RISE_LIVESTOCK_EXEC_SUMM.pdf 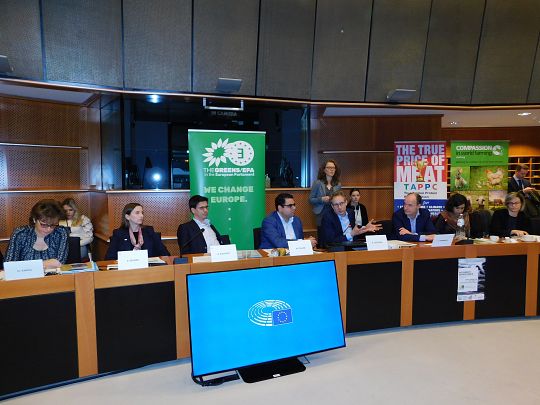 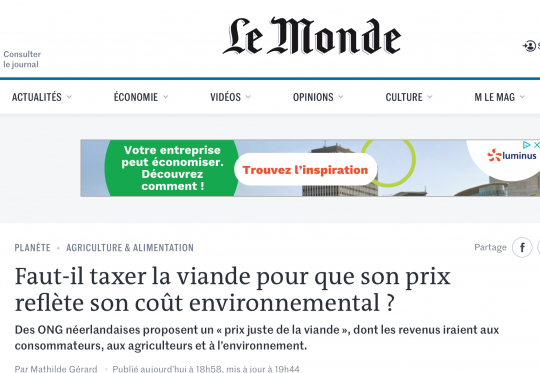 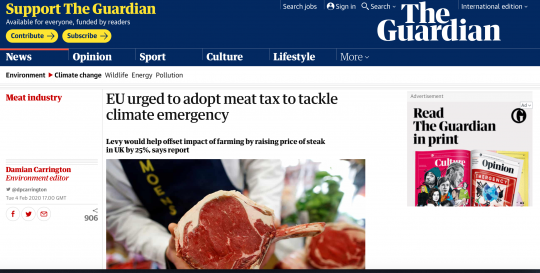 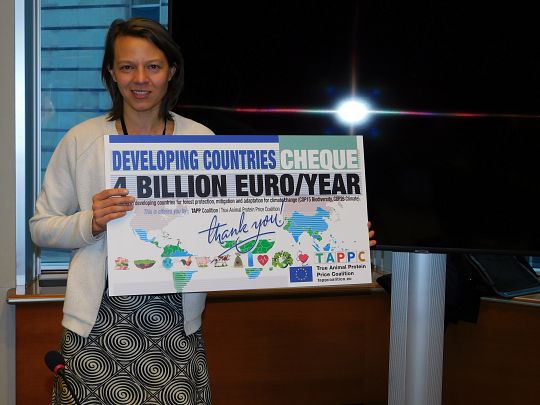 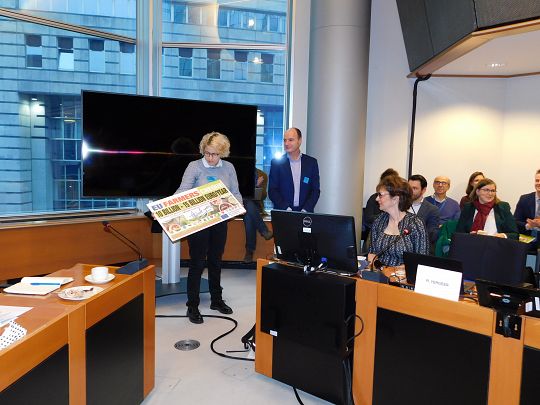 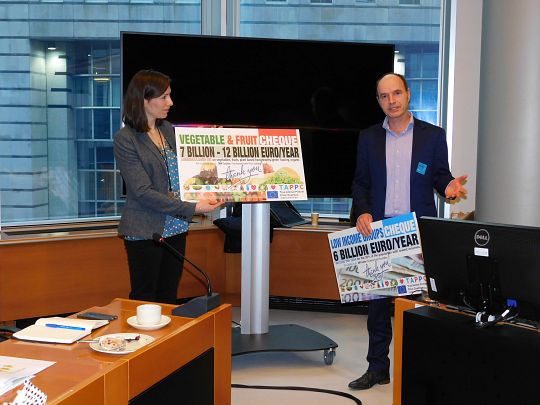 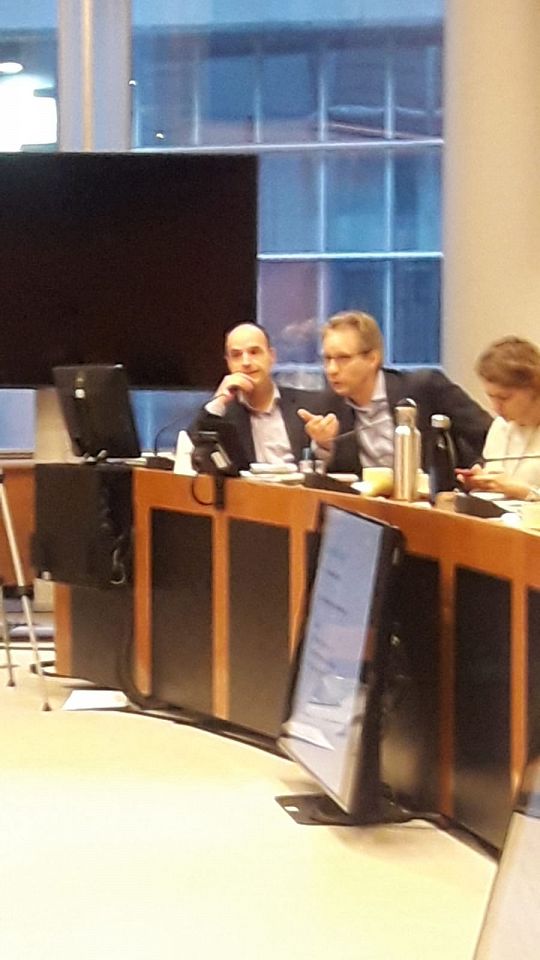 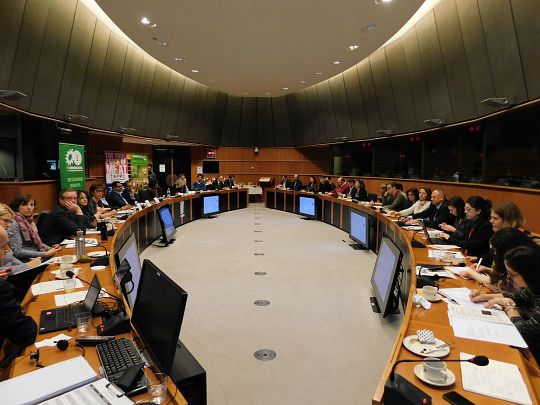