« How to reduce food related GHG-emissions from supermarkets?»

Supermarkets are selling most food people eat, and food contributes to 33% of all global greenhouse gas emissions. This means supermarkets are also responsible for the greenhouse gas emissions from food they sell and for ‘Paris Proof’ reductions in emissions. The new FLAG science based targets developed for food mean that a reduction of approximately 30% GHG-emissions is needed by 2030 compared to 2020. Supermarkets in the EU have to report their scope 1, 2 and 3 GHG-emissions by 2024 or 2025 according to the EU-CSR-directive, depending on their size. This means, they also have to report the GHG-emissions from all food products sold (scope 3). A logical next step could be the EU Commission or EU member states will ask supermarkets to pay a CO2-eq tax for the reported GHG-emissions.

In the Netherlands the industry has to pay a CO2-tax by 2023. A next step could be the retail industry is included in this CO2-tax system, for scope 3 emissions from food (including methane, nitrogendioxide). According to a report written by the EU court of Auditors in 2021, 80% of EU diets carbon footprints is from meat and dairy. This means, if supermarkets would have to pay a CO2 eq tax for food products they sell, they have to pay less CO2-tax if they sell less meat and dairy or start to sell climate neutral meat and dairy.

Only three out of six Dutch largest supermarket chains publish what they emit across their entire supply chain. Only Lidl shows this specifically for the Netherlands, which is as much as the emissions of 3 million Dutch households in relation to their annual energy consumption. Ahold, the parent company of Albert Heijn, published the total percentage of emissions across all the production chains linked to meat and dairy sales, which is more than onethird of the supermarkets’ total emissions (and over 40% of all food related GHG-emissions). TAPP Coalition has doubts if this result is science based, because the EU court of auditors calculated that 80% of carbon footprints of EU diets is from meat and dairy, two times more than was calculated by Ahold.

It is crucial that supermarkets measure and report their entire emissions, including scope-3 emissions. Scope-1 and scope-2 emissions (eg electricity food cooling and light) only account for a few per cent of total emissions, and therefore only measuring these is extremely misleading, a greenwashing tool used by supermarkets that enables them to evade responsibility. Another key finding is that no supermarket has committed to halving all greenhouse gas emissions by 2030 in line with the EU and Dutch government's target of 55% reduction. Ahold is the only supermarket with a lower ambition to reduce 15% of total supply chain emissions by 2030. Aldi, Lidl and Albert Heijn expect the majority of suppliers to start measuring their emissions and set plans to reduce them. Albert Heijn, claims that they will transition to an animal-to-vegetable protein ratio of 40/60 by 2030. None of the supermarkets say they will reduce meat and dairy sales by 50% by 2030. Only two supermarkets are transparent about the share of meat and dairy in their sales, this is over 25%. 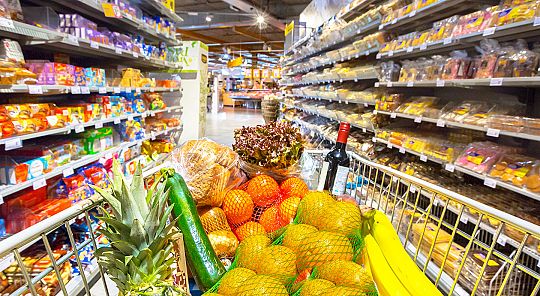