Loss and damage was the most important item at COP27 according to many countries and ngo's. Last Friday, the EU Commission Vice Chair Frans Timmermans proposed a funding mechanism for a Loss & Damage fund, with a mix of options including global taxation of aviation and cruise travels. Another option could be to tax food products with high carbon footprints like meat and dairy. This can be done by increasing meat import or meat export taxes. Increasing sales or VAT taxes on meat is another option, or starting consumer taxes on meat in OECD countries and China.

OECD countries and China can close the climate finance gap with nearly 50 billion USD/year and finance a fund for loss and damage with 100 billion USD/year, if they tax meat with only 1 USD or Euro per kg, said Jeroom Remmers, director of TAPP Coalition, an alliance of food companies and NGO’s with a mission to pay ‘true prices’ for meat and dairy, including GHG-emission costs.

This will also reduce national GHG-emissions in these countries by approximately 1 percent (0,3 Gton CO2eq) and reduce their health care costs and non communicable diseases linked to meat overconsumption like stroke, diabetes 2 and coronal cancer. Last Monday a letter was sent to Frans Timmermans, Vice chair of the EU Commission, the Chinese and American Climate Envoys John Kerry and Xie Zhenhua and OECD environmental ministers to show them this remarkable option for climate finance.

UN Secretary General Guterres said: “adaptation needs are set to grow to more than $300 billion dollars a year by 2030”. António Guterres asked governments to tax the profits of fossil fuel companies and redirect the money to countries suffering loss and damage caused by the climate crisis. This call to action for a global carbon tax on these profits of oil companies was also mentioned by the 39-nation Alliance of Small Island States, as a source of funding for loss and damage, many of whose very existence is threatened by rising sea levels and increasingly intense tropical storms. They asked for a 10 percent tax on profits of oil companies to fund loss and damage. The largest oil companies reported a profit of 59 billion USD. A 10 percent tax could result in 5,9 billion USD/yr.

Another option for climate finance is a tax on meat products in OECD and other countries.

Using meat taxes for climate finance has a double dividend because such taxes in itself will reduce GHG-emissions and deforestation as people will consume less meat when meat taxes will be implemented. If the EU-27 and the USA would implement a meat tax of only 10  dollar cent per 100 gram of meat, this could lead to 70 billion USD/year in additional tax revenues, available for climate finance or payments for loss and damage. If China would do the same, another 58 billion USD/year would become available. If all OECD countries and China would implement a CO2 tax on meat, 147 billion USD/year is available.

TAPP Coalition director Jeroom Remmers said that GHG-emission taxes on meat of 10 USD/euro cent per 100 gram could be implemented in Europe, USA and China first, with an estimated impact of reducing their national GHG-emissions by at least 1 percent (approximately 0,3 Gton CO2 eq, 300 Mton). Higher meat taxes or introducing CO2-taxes on dairy products of course will bring in more tax revenues and will lead to more impact in reduced GHG-emissions from food consumption and production.

Meat tax revenues could be used for three additional goals too, according to TAPP Coalition, depending on national priorities:

2.     reducing prices and taxes of healthy food products like vegetables, fruits and plant based meat/dairy products;

TAPP Coalition proved a majority of west-European consumers support such taxes in consumer surveys. A large majority in EU parliament asked to apply the highest VAT rate on products like meat, in a vote last year for the EU Green Deal..

An environmental tax on meat products of 30-50 percent at EU-28 level would bring in 32 billion euro per year and would lead to a reduction of 120 Mton CO2eq/year, equal to 3 percent of all GHG-emissions from the EU-28 (‘Sustainability charge on meat, 2020’). If all EU-27 countries would use the normal (highest) VAT level on meat, this would generate 21,6 billion euro per year in tax revenue, with an estimated reduction in GHG-emissions of 81 Mton/year.

Another option is to tax food related GHG-emissions in Europe at the level of retail companies (supermarkets) and food services. Total GHG-emissions from EU food consumption are 477.220 million kg CO2 eq per year (for 446 million EU inhabitants). If a CO2 tax of 50 euro/ton CO2 would be applied, this would generate a tax revenue of 23,8 billion euro per year. TAPP Coalition estimates this will reduce GHG-emissions at EU level by 89 Mton CO2 eq/year, 2,2 percent of all GHG-emissions at EU level.

There is no reason why we should not start finding new mechanisms for climate finance. We have promised this to other countries and developing countries will not support climate policies if rich countries don't pay. The best way for the Planet and for our own health, is to do this by taxing meat in rich OECD countries and China. 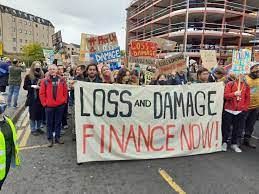